Hannah Witton is a 22 year old Youtuber, blogger and University of Birmingham student who is best known for making vlogs (video blogs) about sex, relationships and other stuff.

After only 3 years of starting her YouTube channel, Hannah has amassed over 45,000 subscribers and over 2.6 million video views. With an interest in PR, communications, social media, television and media production what started as a bit of fun has turned into something that could genuinely lead to a career for Hannah.

Easyspace spoke with Hannah about her YouTube experiences and the impact it’s had on her life:

Q1. Please give us a brief background on yourself and tell us about your YouTube channel.

I’m a 22 year old history student in my final year. I started making videos on YouTube about three years ago and I make a variety of things from vlogs on topical issues and my life, comedy videos, music and I have a sex education series.

Q2. When & why did you start making YouTube videos?

I started making videos about 3 years ago when I was aupairing in France. I lived in a tiny village and there was nothing for me to do after the kids had gone to bed so I started getting into watching YouTube videos. It seemed like a really fun thing to do and I wanted to get involved with the community of people and so I just started making videos with no clue as to what I was getting myself into!

Q3. Your YouTube channel has over 45,000 subscribers, with over 2.6 million video views. When you started out did you ever imagine your audience would become so large? Do you ever feel overwhelmed or intimidated knowing so many people will see your videos, or is it something you’ve grown used to?

I’ve grown used to it because my audience has grown steadily with me. I’ve never had to deal with going viral and adjusting to something like that. It’s always been steady growth and so it feels very normal to me. Although when you’re just looking at the numbers it’s just text on a screen but when you actually try to imagine that many real life people watching you, that’s a bit scary. I never thought of my audience getting this big. It took me 3 months at the beginning to get 100 subscribers and since then it has just continued to grow and grow.

Q4. How did you promote your channel when you first started? What did you do to get so many subscribers?

I just promoted my channel on Facebook to my current group of friends. I got a twitter account and would post them on there too. I think I started to gain subscribers when I started making friends through YouTube and they would recommend my channel to their subscribers and if we ever met up we’d make videos together. I’ve found that collaboration is the best way to build your audience and it’s super fun!

Q5. Who have you learned from or been inspired by, to develop your youtube channel? Who are you favourite vloggers?

I’ve always been really inspired by Grace Helbig, she’s so funny and you can tell that she works so hard for everything that she has achieved. 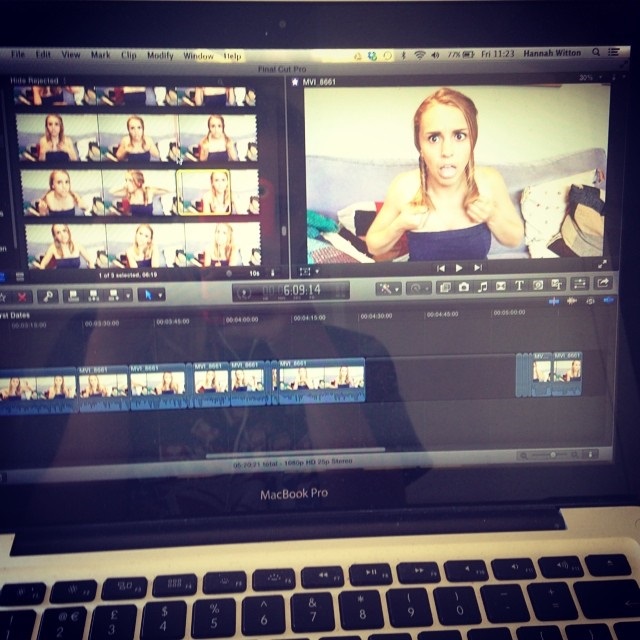 I try and make a video once a week but with university that’s always been a struggle. I tend to write a video when the idea comes to me, either a full script or just bullet points of what I want to say. I currently film on a Canon 600D, I use a rhode mic and have studio lights (I bought the lights because I tend to do university work during the day and it meant that I could film in the evenings and I wouldn’t have to worry about bad lighting). Then I just sit down in front of the camera for about 10-15 minutes and talk. The edit then tends to take about 1-2 hours depending on how ambitious the video is.

Q7. What advice can you give to people who feel they are too shy to start making their own YouTube videos?

If you’ve got things you want to say my advice would be to just sit down in front of a camera and talk. You don’t have to upload any of those videos. I filmed a few videos before I uploaded any and none of those made it to YouTube. But it got me used to talking to a camera and boosted my confidence until I was ready to actually put something online.

Q8. For somebody wanting to start their own channel, what advice would you give to help them create a popular channel with lots of subscribers?

I think if you’re starting a YouTube channel with the aim to get really popular you should probably rethink the reasons why you want to do it. Start because you have ideas and thoughts you want to share, because you want to meet likeminded people and have fun. My best advice would be to make videos that you personally like and talk about things that you are passionate about. If you talk about something that interests you, the video itself will be interesting to the viewer.

Q9. What opportunities have arisen from having a popular Youtube channel? Do you make any money from your videos?

I make some money from adverts on my videos like every other YouTuber. I’ve also recently been commissioned to make videos for other channels and also charities that work in sex education. I really hope I can do more things like this after I graduate.

Q10. You’ve made over 100 videos so far. How do you keep coming up with new ideas for videos?

Sometimes ideas just pop into my head (usually right as I’m falling asleep and I have to grab my phone and write a note before I forget). Often inspiration comes from watching other people’s videos. Or just hanging out with friends brainstorming video ideas and we tend to come up with some good ones.

Q11. You are currently a History student at Birmingham University. How do you balance your studies with making youtube videos?

It’s difficult but I feel like after 3 years I’ve finally found the perfect balance. I work on university things during the day and then my evenings are dedicated to YouTube (not every evening, I would have no social life!)

Q12. Do you use Facebook, Twitter, etc, to promote your channel? How successful has it been for you? Any advice on how people can use social media to promote themselves?

Yes I use Facebook, Twitter & Tumblr to promote my videos. My best advice would be to not only promote your videos on those sites. Use them like anybody else. Tweet random, funny stuff, post pictures, engage with other people. That’s the way you gain followings on those sites. And then when you upload a new video, share it. Just make sure that your whole twitter feed isn’t just video links!

Q13. What do you think are the key reasons for the success of your youtube channel and would you do anything differently if you were starting it today?

I’ve had set backs but I’ve always remained positive and I think my attitude towards life comes across in my videos and people relate to that. There are a lot of things on my channel and things that I’ve done that I look back on and I’m quite embarrassed by them but I wouldn’t change anything because it’s all a learning curve and I wouldn’t be here now if I wasn’t that awkward girl 3 years ago.

Q14. What are your plans/goals for the next 6 months?

Well first of all, graduate! Then I want to go full time with YouTube and social media work. I won’t be studying anymore so I’ll finally be able to put all my time and effort into what I love and I’m really excited for it!

Thanks Hannah, from everyone at Easyspace

If you want to find out more about Hannah and her YouTube videos, then click on the link below for more info: