The domain name industry is going a bit crazy of late, due the explosion in the number of new domains that are due to be launched.  Until recently there was only 22 domain name extensions such as .com, .co.uk, etc. but throughout 2014 thousands of new domain names will be released such as .London, .Hotel, .Restaurant, etc. 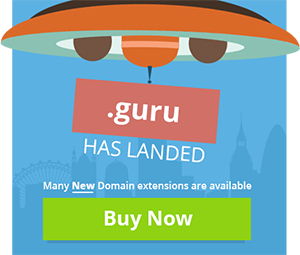 Starting from 4pm today, Easyspace will be launching the first batch of these new domain extensions:

The internet has grown so rapidly since the first 22 extensions were released, that ICANN – the internet corporation that assigns names & numbers has started a process for people to buy new domain names which are maybe more relevant and more applicable.

The domain name industry has been building up to the launch of these new domain extensions for the past 5 years. Finally the day has arrived for the first batch of these new extensions to be released. Very soon you will start seeing adverts online, in magazines, newspapers, TV, etc that features these new names such as .hotel, .guru, etc.

So far .GURU is the most popular new Domain Name Extension

There are approximately 120 million .com domain extensions registered, and approx 10.5 million .co.uk’s. With so many extensions already sold out, it can sometimes be difficult to get the exact .com or .co.uk name you want, which often results in people having to register quite long domain extensions. Partly in response to this problem, these new domain extensions have been created to make it easier for people get a name they really want – in particular short names, names that quickly show people what your website is about e.g. .hotel, .radio, .recipes, .builders, .cab, etc

Today is the start of an exciting time in the history of domain names. So don’t miss out – have a look at the new domain names that are being launched with Easyspace, and get your perfect domain name.