Fraser Doherty, now 24, set up SuperJam at 14, using his Gran’s jam recipes. After selling his produce at farmers’ markets and to delicatessens, he developed a method of producing jam 100% from fruit. After setting up production, creating a brand and perfecting his recipes, Fraser became the youngest ever supplier to a major supermarket chain when Waitrose launched the range in March 2007. SuperJam now supplies over 2,000 supermarkets around the world (incl. Tesco, Asda Wal-Mart, Morrisons, Sainsbury’s, Waitrose) in countries including Australia, Russia, Denmark, Finland and Ireland.

Easyspace recently caught up with Fraser for an interview:

Q1. Fraser, tell us a little bit about your background and what led to you to becoming an entrepreneur and setting up SuperJam.

I was always interested in starting my own business ever since I was eight years old. My first business idea involved baking cakes and selling them at school to raise money for Greenpeace. By the time I was 14 I took an interest in my grandmothers secret jam recipes and asked her to teach me how to make jam.  We spent an afternoon making jam together and I soon started selling it to the neighbours at farmers markets and to small shops. Soon I was cooking 1000 jars of Jam a week from my parents tiny kitchen and I soon realised that I would have to come up with some kind of big idea to move production into a factory. After doing a lot of research I came up with a way of making jam 100% from fruit. I called it SuperJam and pitched it to Waitrose when I was 16 years old. They later lunched SuperJam in all of their stores around the UK and we have since gone on to sell millions of jars around the world.

Q2. It’s a big leap going from a successful, but small jam seller at farmers markets, to where you are now – with your jam being sold in major supermarkets, not just in the UK, but overseas too. Many people, especially a teenager would have been happy with your success at farmers markets – but you took it to the next level. Why & how did you make that leap?

I turned up at the meeting wearing my Dad’s suit; it was probably two sizes too big for me! The buyer listened to my idea and give me some advice.  A year later I had developed a product that they were willing to put on their shelves, after convincing a factory to work with me and creating a brand.

Q3. Originally you made the jam yourself in your parents kitchen, but as the business grew you had to upscale. Tell us about how you expanded the manufacturing process, to what you now have?

Obviously as a 16-year-old I wasn’t really in a position to build my own jam factory. I was going to have to convince an existing jam manufacturer to work with me to produce my recipes on a big scale. And so I travelled around the country, from the tiny little islands in Scotland to the big cities in England, trying to find somebody who would be willing to work with me to make my SuperJam. As I am sure you can imagine most of these hundred year old factories Where a bit sceptical of a teenager turning up with no money and no experience. But eventually I found one factory who were willing to give my idea a shot, we figured out how to produce my recipes on a big scale we were soon ready to start supplying supermarkets!

Q4. Did you follow a business plan and how difficult was it getting the business established in the early days?

Of course, because I was so young, I didn’t really know anything about supplying supermarkets or how factories work. But something that I have been amazed by on my whole journey has been how willing other entrepreneurs are to share what they have learned with me.

When I was 15 I met a local entrepreneur called Kevin, who became my mentor. He shared lessons with me about mistakes he had made, people he had met and lessons he had learnt. With his help and help of others I was able to overcome most problems that came my way.

Q5. How difficult was it getting your jam on supermarket shelves? Did you face any setbacks in dealing with supermarkets before achieving this?

When I pitched my idea to Waitrose, they explained that, although it was a very good idea, there would be a long way to go until I would have a product that could sit on the shelves of a supermarket. I would have to set up production in a factory, create a brand and do a lot more work on my recipes before they would be happy.

The branding was one of the main challenges because at the beginning I thought that packaging should make people laugh and if you could make them laugh enough then maybe they were buy your product. 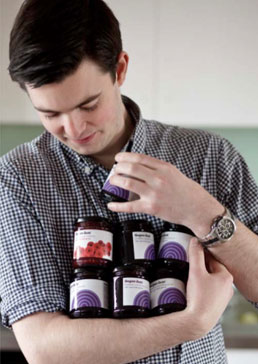 So I first created the brand around at comic book idea-we had a lot of fun writing jokes on the labels and even spoke about making a superhero costume for me, the ‘jam boy’ to wear at the launch of SuperJam!

But when I pitched this idea to the supermarket, they explained that packaging is not there to make people laugh, it is there to get the message across. So after they said no to my idea I had to throw everything in the bin and start  all over again.

Second time around, we created a brand that was a lot more simple and that did a far better job of getting our message of ‘100% Fruit’ across.

Q6. How did you fund your business, particularly its expansion?

A lot of the time, people imagine that starting a business has to involve borrowing money and taking on investment. But in my experience, it is possible to start something on a very small scale and with a lot of hard work, grow it organically, staying independent all the time. In my case, I started up by making 12 jars of jam, which I sold to the neighbours. I then had enough money to make 20 jars and then 40 and so on, until we wound up making millions of jars – never having to borrow any money along the way.

Q7. How did you market your business when you first started and how do you promote it now?

When I first started I had very little money for marketing and so I had to literally stand in the supermarket stores handing out samples and telling people about my products all by myself. But now we have more budget for advertising, giving away free samples and promoting the business online.

Q8. Was there a ‘tipping point’ to your business’s success?

When SuperJam launched in Waitrose, there was a huge amount of media coverage. I had no idea that this was going to happen but when did I found myself been written about the newspapers and magazines, interviewed on TV and on radio. Because of this media coverage, sales went through the roof and we very quickly launched in thousands more stores. In fact on the first day in one store in Edinburgh, where I come from, they sold more than 1,500 jars of SuperJam in one day, which was more jam than they would normally sell in a whole month!

Q9. Do you use Facebook, Twitter, YouTube, etc, to promote your businesses? How successful has it been for you? Any advice on how businesses can use social media to promote themselves?

For my business, the most successful types of promotion have been off-line; handing out samples in stores, money off promotions in supermarkets and conventional PR. However, I have always kept a blog, Facebook and twitter and I love hearing directly from people who buy our products – what they do with them and what they think we should do differently. I think the only piece of advice I have for brands is not to waste their customers time with inane drivel on social media.

Q10. How does your jam match up against your competitors and how do you stay competitive?

Most jam brands have been around for at least 100 years, which means that it is not the most innovative or exciting category in the world. SuperJam stays competitive by offering something new, innovative and fun in the category that is dominated by very old, boring, traditional brands.

Q11. If you had the chance to start SuperJam all over again, what would you do differently?

I have definitely made a lot of mistakes on my journey! I think one of the biggest lessons I have learned is that everything takes a lot longer than you first imagine so you should not beat yourself up about it.

Q12. Which entrepreneur/person has inspired you the most & why?

My heroes in business are people like Anita Roddick, the late founder of The Body Shop. I am inspired by business people who use their business to do more than just make money, who use it to do good.

Q13. What advice would you give to somebody thinking of starting their own business?

1) don’t be afraid, you have nothing to lose.
2) start small, you don’t have to jump in at the deep end.
3) ask for help – people will more often than not be willing to give it to you.

Q14. What are your future plans for SuperJam?

We are getting ready to launch in the US, which is really exciting.  I’m also ambitious for the growth of our charity, The SuperJam Tea Parties, which runs hundreds of free tea parties for elderly people.

Thanks Fraser, from everyone at Easyspace. Good luck with your future plans.

If you want to find out more about Fraser Doherty then you can visit him at his websites www.SuperJam.co.uk and www.fraserdoherty.com

Has Fraser’s online activities inspired you to start your own online business venture? If it has, then start off by registering the domain name you want for your business. Then get your website set up. With this in mind, Easyspace has created EasySiteLive PRO – a website builder product, to help get your website up and running in no time. Click here to try our new EasySiteLive PRO website builder for 21 Days Free of charge.