Latest news and offers Say No to dot. gone

Say No to dot. gone 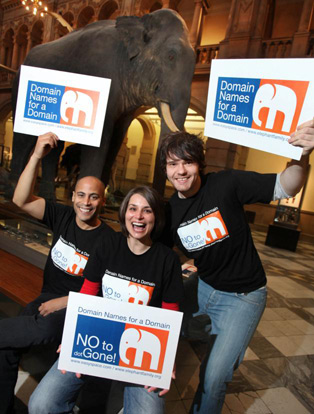 The plight of the Asian elephant is being highlighted by the launch of a ‘Domain Names for a Domain’ campaign today (Monday 12th October 2009) by UK web hosting provider Easyspace.

Under the banner ‘Say No to dot. gone’ Easyspace will donate 5 pence for every domain name it sells over the next six months to elephant family, the only UK charity dedicated to the plight of the endangered Asian elephant.

Easyspace, which is part of Glasgow-based hosting company iomart Group Ltd, is the UK’s third largest domain name registrar, registering thousands of domain names each month. Elephant family is the charity set up by Mark Shand, the conservationist and brother of HRH the Duchess of Cornwall, to protect the Asian elephant.

Errol Vanderhorst, managing director of Easyspace said: “Easyspace has been associated with the Asian elephant ever since we adopted it as our company logo back in 2002. Concern about the destruction of its habitat led us to thinking about what practical steps could we take to raise awareness of its plight.”

“As a domain name provider, we felt that the term ‘dot.gone’ tied us in perfectly with the Asian elephant’s fight for survival. If we do not act now there is a very real possibility that the Asian Elephant will be extinct in the wild within the next forty years.”

Errol added: “It’s the important work that elephant family does in preserving the Asian elephant’s natural domain that has made it such a perfect partner and recipient for the funds raised through our ‘Domain Names for a Domain’ campaign.”

The campaign was launched under the watchful eye of Sir Roger, the famous Asian elephant which is one of Culture & Sport Glasgow’s most popular exhibits at the Kelvingrove Art Gallery and Museum (see picture). The six month campaign will culminate in Easyspace sponsoring an elephant at next spring’s Elephant Parade in London.

Ruth Powys, director of elephant family said:” The Domain Names for a Domain campaign is the perfect public symmetry for what we are trying to do as a charity. The money Easyspace raise will help us to buy up land to connect two forest fragments in Kerala in India to create an elephant corridor. We are so excited to have their support.”

The Asian elephant is classified as an endangered species. Its population has plummeted during the last century from 200,000 to just 30,000, with 60 per cent of those losses happening in the last decade. Its habitat, which once stretched from China to Syria, is now some 169,885 square miles (approximately the same size as Tunisia) due to human encroachment on its domain, loss of habitat and poaching.

A special ‘Say No to dot.gone’ campaign has been created for Twitter and you can show your support for the campaign by following either Easyspace (twitter.com/easyspace) or elephant family (twitter.com/elephantfamily)

Regular updates on the plight of the Asian elephant can be found on the elephant family’s Facebook page (http://www.facebook.com/elephantfamily?ref=nf)